Wind Farms – The Other Side 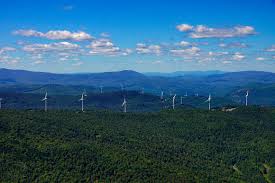 I recently came across an article (“Building more wind farms doesn’t make sense”) from WallaceFarmer publication about the wind projects in Iowa.  The author had some interesting facts that we should know about.  Despite the hype on renewable energy, the costs are daunting and we, the ratepayers, get to pay more for it.  Wind energy, more efficient than even solar, pays a very high price for what you get back, including the savings of CO2 into the atmosphere.  Renewables are a viable addition, but as a replacement, they fall woefully short in energy production and in bang for the buck.  Here are excerpts from that article:

“…Warren Buffett has said that building wind turbines makes no sense without the federal Production Tax Credit (PTC). …During the tax bill debate in Congress, U.S. Sen. Lamar Alexander, R-Tenn., said, “For the next 10 years, extending the tax credit one year at a time could cost $60 billion or more, based on the most recent data from the Joint Committee on Taxation, about enough to pay for the $63 billion Congress spent in the recently passed budget agreement.” As part of the new tax law, the PTC is extended for 10 years….The reason the industrial wind fiasco is being pushed forward is because people believe it will avoid carbon dioxide emissions. Power plants burning coal to generate electricity put CO₂ into the atmosphere. The American Wind Energy Association boasted in 2016 that wind turbines avoided putting 159 million metric tons of CO₂ into the atmosphere. That sounds like a lot until you compare it to the 35 to 40 billion metric tons of CO₂ attributed to mankind every year. The 159 million metric tons pencils out to far less than 1% of the total amount of CO₂ produced.
Even if the industry doubled its wind power electricity generation capacity they would not avoid over 1% of the CO₂, by their own optimistic numbers. The $60 billion cost to U.S. taxpayers by extending the wind energy production tax credit, or PTC, over the next 10 years is a lot of money. I think we can find better ways to spend that money than by ruining the rural U.S. on a pipe dream.”

The complete article can be found here: